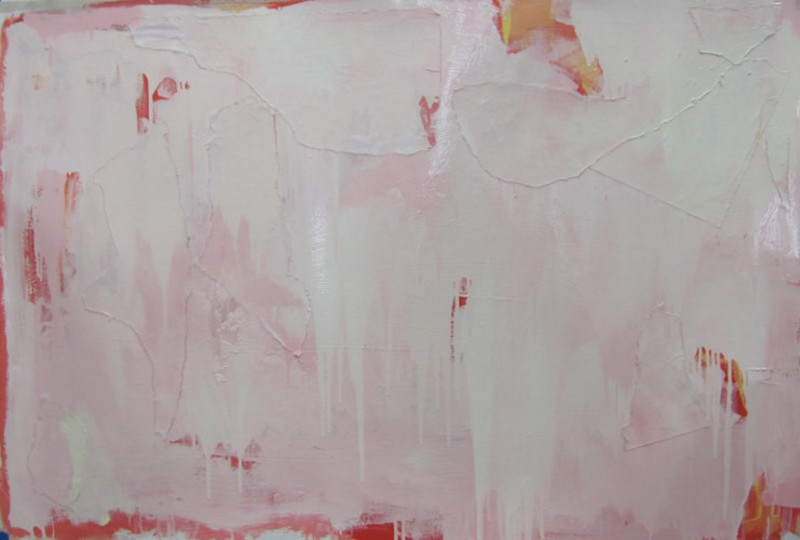 The Quogue Gallery is pleased to announce the opening of “Chrystie Paintings” recent oil, enamel and mixed media works by Holland Cunningham.

The delicate harmonies of Holland Cunningham’s work are inspired by an array of seemingly disparate sources and influences that span centuries. Her passion for plein air painting – a fundamental principle for the Impressionists – in tandem with her deep reverence for Classical and Renaissance painting – spill onto her canvases to create abstract works that interweave the echoes of history in a fresh, contemporary and enduring way.

Holland Cunningham’s work, be it oil on canvas or mixed media on paper, are a symphony of subtleties. Paintings that at first glance appear predominately monochromatic such as Chrystie (Pink) and Chrystie 18 upon closer examination are found to be otherwise. Awash in a rainbow of hues that have been applied with such delicate gesture, the colors on the canvas dance together in a graceful waltz. If such artists as Joan Mitchell and Helen Frankenthaler tempered the wildness of their contemporaries Jackson Pollock and Willem De Kooning, then Cunningham has added gossamer wings to these abstract expressionists. The tactility, the gesture, the layering of paint are all there, but sans the melodrama.

In abstract works such as Chrystie (Pink) Cunningham layers colors so that the surface shimmers with hints of the underlying darker shades and allows the richer, saturated tones to peak out here and there. Bold bits of strong orange and reds define the composition by bleeding through a variegated weave of shades of pinks.

The same restraint is on display in her more figurative and representational works such as Chrystie 22 (Figures) and Christie 22 (Triptych). In the former, Cunningham’s judicious use of fragmented line and shadow allow the figures to be at once earthly and ephemeral, exhibiting the geometry of Cezanne’s solid figures in such works as Three Bathers (1879-92) while recalling the dreamy, floating figures of Chagall.

In Chrystie 22 (Triptych), Cunningham’s multitude of influences is at play. She has a chosen a favored tri-panel arrangement of religious painting from the Byzantine to the Renaissance that has graced the altars of churches and cathedrals for millenniums. Here the three panels reverberate with the freshness of the landscape as her passion for plein air painting is indulged. Emerging from the textured canvas are leaf and flower forms that resonate with the ghosts of Monet’s masterpiece Nymphea paintings. In Cunningham’s triptych, the overall whites and shades of green are enhanced by a varied underlying palette to create a painting that captures a particular natural environment in a unique and timeless way.

Holland B. Cunningham was born in Roanoke, Virginia in 1967 and educated at the University of Virginia where she studied art history and studio art.  She continued her studies in New York at the Art Students League and National Academy of Art and Design. During the summer of 2012, she was a resident at the Bau Institute in Puglia, Italy. Cunningham currently resides and works in both New York City and Quogue.

Quogue Gallery was established in 2014 by Chester and Christy Murray, long-time art collectors and residents of Quogue. The gallery features contemporary emerging and established artists whose work includes paintings and prints, photography, glass, and

sculpture. The gallery’s main focus is on displaying the work of East End artists who capture a mood, a color, or the extraordinary light that define the East End. The artists do not necessarily represent the specific realities of the area, but rather have each uniquely been influenced or inspired by their surroundings. The gallery also exhibits modern and contemporary artists whose work fits within the gallery’s aesthetic.   Recent exhibitions have included: Emerson Woelffer: Works on Paper; Le Corbusier: Unité; and Shifting Tides: Photographs by Janice Mehlman.