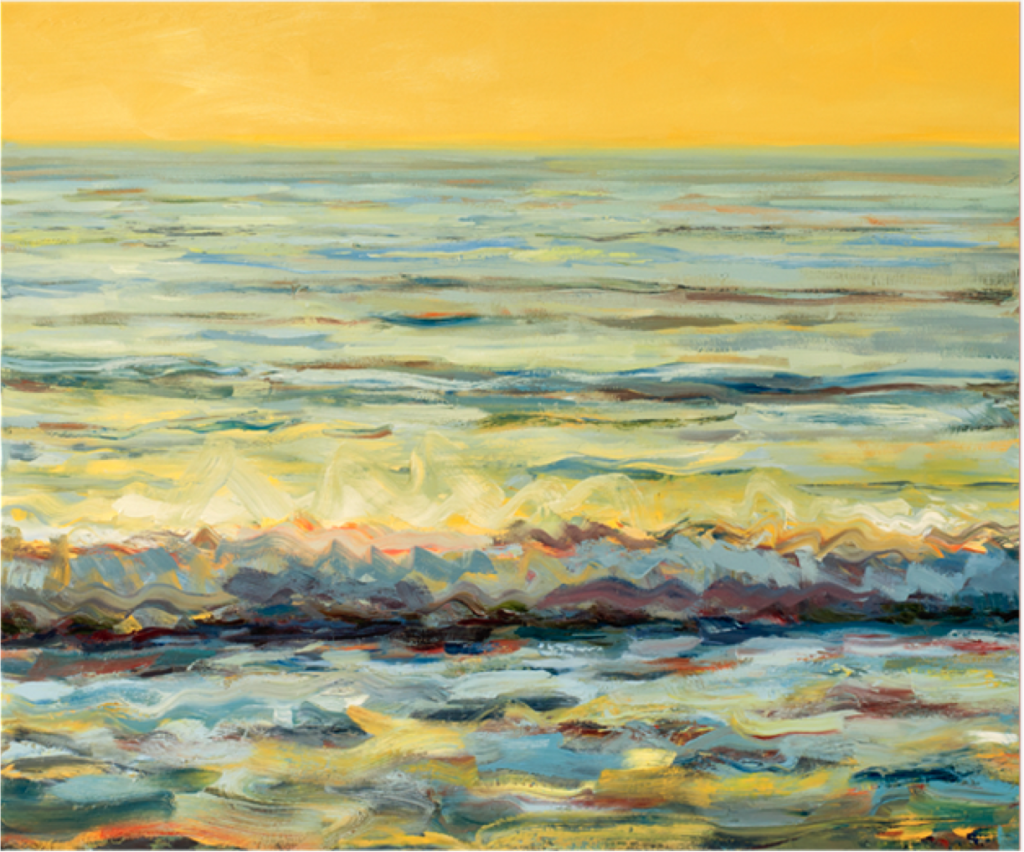 Quogue Gallery is pleased to announce that it will be making its debut appearance at this year’s ArtHamptons art fair. The gallery, which opened last year, will have a booth exhibiting six artists, three painters: Marshall Crossman, Holland Cunningham, and Sam Glankoff; and three photographers: Janice Mehlman, Peter Moore and Barbara Vaughn.

Marshall Crossman is a contemporary painter based in Pacifica, California, near San Francisco. She is primarily a studio painter working in oil on canvas. Originally from the Midwest, Crossman earned her BFA at Colorado State University and then relocated to the west coast in 1977 and was influenced by the Bay Area figurative painters although she paints the figures abstract by motion, water and emotion. Her waterscapes are inspired by living along the coast.

Holland Cunningham is a painter with studios in New York City and on the east end of Long Island in Quogue. Her inspiration comes from a passion for plein air painting as well as classic paintings of the renaissance and other periods that serve as a springboard for her conceptual abstractions. She uses various materials to create her works such as oil, water-based media and photography. Cunningham studied art history and studio art at the University of Virginia, the Art Students League and the National Academy of Art and Design. She was a resident at the Bau Institute in Puglia, Italy in the summer of 2012.

Sam Glankoff (1894-1982) was an American abstract expressionist who at the end of his life finally won the recognition he deserved in the pantheon of Modern Art. Born in New York City, Glankoff was virtually self-taught, studying and copying paintings on display at the Metropolitan Museum of Art and later taking evening classes at New York’s Art Student’s League. A pacifist, Glankoff left the United States in 1917 for Cuba as a conscientious objector to World War I. In the early 1920s, he returned to New York working as a commercial artist and illustrator to support himself but always pursuing his personal art primarily with woodcuts and painting. Eventually he conflated the two media creating a wholly inventive technique, the results of which became known as “print-paintings” a term coined in the mid-1970s by curators from the Whitney Museum. It wasn’t until October 1981, at the age of 87, that Glankoff had his first-ever solo exhibition at a commercial gallery. Today, his works may be found in many public, private and corporate collections, including those of the Metropolitan Museum of Art and the Solomon R. Guggenheim Museum in New York.

The unique vision of internationally acclaimed photographer Janet Mehlman conflates architectural structures and photography resulting in images that become striking artistic statements. Throughout her 30-year career Mehlman has played with the effect that light and shadow have upon architecture and various other objects, thus creating her distinct point of view. Mehlman directs the photography program in the Art Department of Kingsborough Community College of the City of New York. Mehlman

Peter Moore’s career in photography began in the 1930’s when he was 10 years old with a simple box camera. The rapidly evolving equipment and technology that have transformed photography since then have never intimidated Moore; rather they have and intrigued him with the vast possibilities before him. “The camera is my paintbrush, moving constantly as I create and interpret the intensity of color, depth, surface and textures leading to a new level of creativity and excitement. The dark room has become light.”  Moore studied and worked with the renowned photographers Ruth Bernhard and John Sexton. His work is owned by individual collectors as well as corporations and charitable organizations. In 2010, his series of photographs taken in front of The Guggenheim Museum were published in a book, A Moment at the Guggenheim, that presents an arresting visual narrative. Moore and his wife Caroline divide their time between Manhattan and Quogue.

Barbara Vaughn is an acclaimed photographer who takes as her subject matter bodies of water from across the world. By zooming in closely, and skillfully framing reflections cast by a vast array of structures and objects, such as buildings, boats and flags, she creates stunning abstract images. After earning her BA from Princeton University, Barbara Vaughn studied at the International

Center of Photography in New York. Her work has been published in numerous books and periodicals, including The New York Times, Vanity Fair, Time, Vogue and Art in America.

Quogue Gallery was established by Chester and Christy Murray, long-time art collectors and residents of Quogue. The gallery features contemporary emerging and established artists whose work includes paintings and prints, photography, glass, and sculpture. The gallery’s main focus is on displaying the work of East End artists who capture a mood, a color, or the extraordinary light that define the East End. The artists do not necessarily represent the specific realities of the area, but rather have each uniquely been influenced or inspired by their surroundings. The gallery also exhibits modern and contemporary artists whose work fits within the gallery’s aesthetic.   Recent exhibitions have included: Emerson Woelffer: Works on Paper; Le Corbusier: Unité; and Shifting Tides: Photographs by Janice Mehlman.