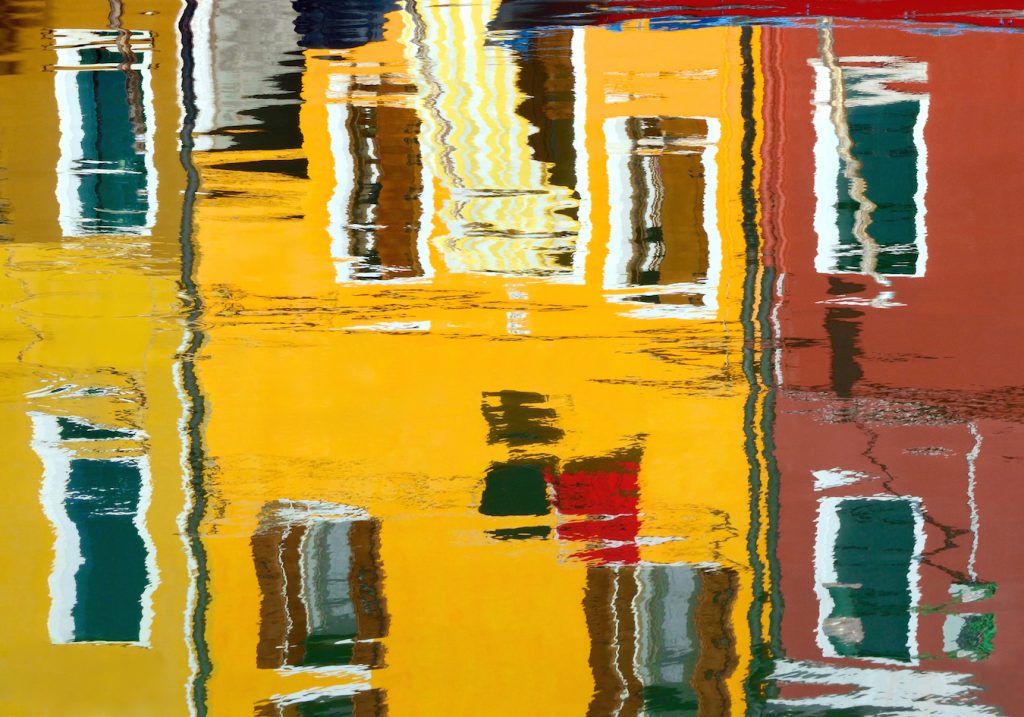 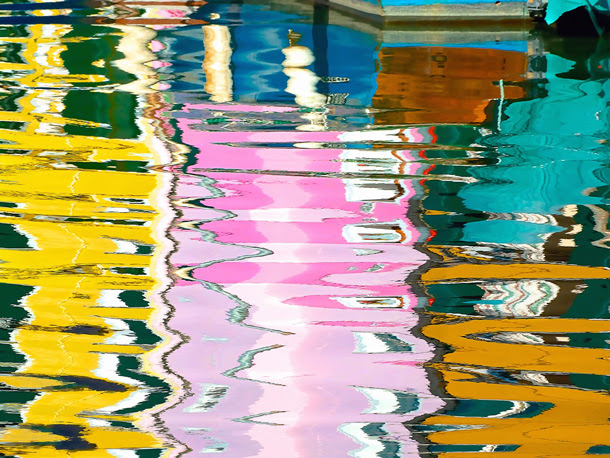 Quogue Gallery is pleased to announce Optasia, an exhibition of new works by acclaimed photographer Barbara Vaughn.  Vaughn takes as her subject matter bodies of water from all across the world. By zooming in closely on and skillfully framing reflections cast by a vast array of structures and objects, such as buildings, boats, and flags, she creates stunning abstract images. “Optasia,” the Greek word for a vision or apparition, aptly captures “the sense of what I see in fleeting moments of the reflections I photograph.” [ABOVE: “Vicinato II,” 2012, Archival Pigment Print, 42″ x 56″]

After two decades of making representational art, Vaughn relinquished recognizable manifestations of reality and embraced an array of cubist, abstract, and postmodern influences. “This bicoastal photographer,” writes The San Francisco Chronicle “has taken a pictorial cliché, reflections on the surfaces of bodies of water, and turned it into a means of generating compositions that echo classics of Surrealist and abstract painting.” The rich colors and sinuous lines present in many of Vaughn’s works immediately recall, among other references, Joan Miró, whose paintings expanded the vocabulary of Surrealism. Her photograph Pania, for example, a minimalist, predominately blue composition defined by an array of amorphous shapes in primary colors, is reminiscent of Miró’s Blue of 1961, which is rendered in an equivalent palette and similarly emphasizes relationships between size, form, and color. 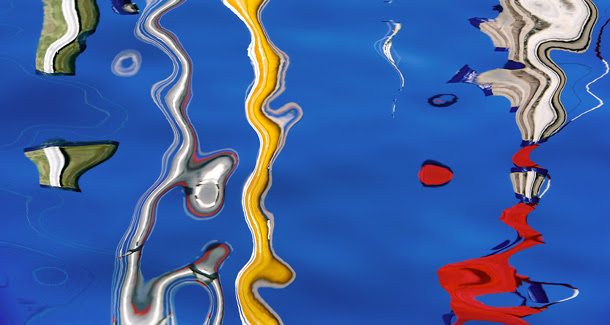 Many of the works on view as part of Optasia depict the Mediterranean Sea or, more accurately, the surface waters of its countless inlets and lagoons. Several works, including Burano, Tessera II, Ifantos, Vicinato II, shot on Burano, an island in the Venetian Lagoon known for the vibrantly colored houses that line its canals. Vaughn observed how the array of vivid hues combined with the simple architecture of the urban landscape created a unique color-blocking effect on the canal’s mirror-like surface&emdash;an effect that she subsequently captured to magnificent end in these photographs. 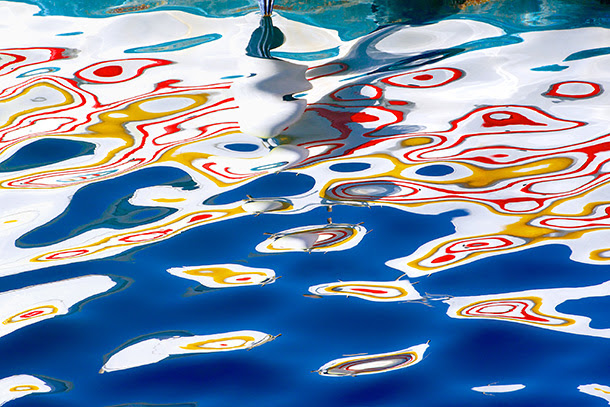 Venice has served as muse for Vaughn in another way: the city is home to the Peggy Guggenheim Collection, a unique modern art museum housed in a waterfront palazzo, the former residence of Ms. Guggenheim. The images Vaughn created in Venice are therefore not only in dialogue with the city’s extraordinary atmospheric conditions and built structures, but also with iconic artworks by some of the 20th century’s most lauded figures, such as Alexander Calder and Constantin Brancusi.

The limitless gracefulness of Brancusi’s groundbreaking sculpture Bird in Space(1932–40), for example, finds parallels in her work. Just as Bird in Space indexes a bird via its aerodynamic form rather than through particular distinguishing characteristics such as wings, feathers, and a beak, Vaughn’s reflections merely suggest specific referents. The fluidity of line in her work also bears the stamp of Brancusi’s and Calder’s influence, which finds extension in the buoyancy and balance evident in Vaughn’s compositions. While the shapes and planes of Calder’s mobiles gently float in the air, seemingly in defiance of gravity, the abstract forms in Vaughn’sPlotos, Korali, Anodikos have the appearance of soaring freely within unidentifiable spaces. 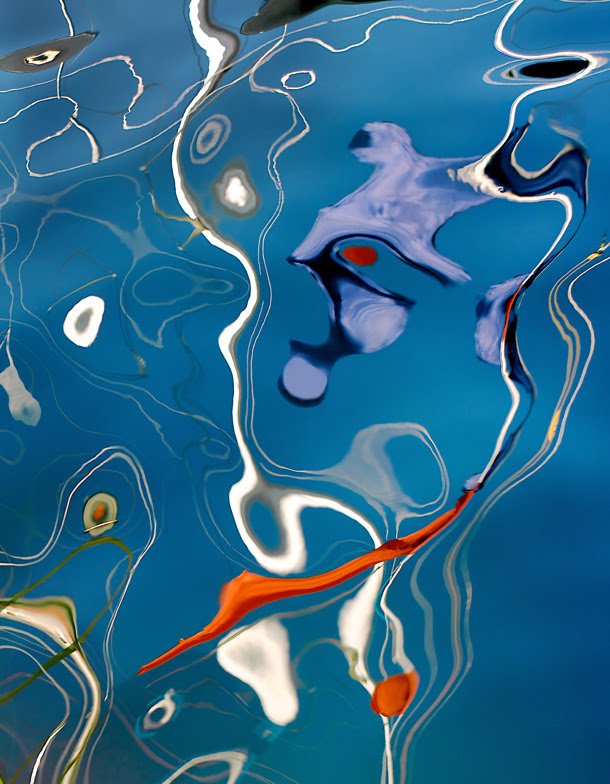 A look at the in-situ shots for these works offers a “eureka” moment for the viewer, providing context and a visual explanation of the work’s abstract imagery. The images are of reality, just of a very small sliver, hence why they appear abstract.

Barbara Vaughn was born in Philadelphia, Pennsylvania. After earning her BA from Princeton University, she studied at the International Center of Photography in New York. Her work has been published in numerous books and periodicals, including The New York Times, Vanity Fair, Time, Vogue, and Art in America.

Quogue Gallery was established in 2014 by Chester and Christy Murray, longtime art collectors and residents of Quogue. The gallery features contemporary emerging and established artists whose work includes paintings and prints, photography, glass, and sculpture. The gallery’s main focus is on displaying the work of East End artists who capture a mood, a color, or the extraordinary light that define the East End. The artists do not necessarily represent the specific realities of the area, but rather have each been uniquely influenced or inspired by his or her surroundings. The gallery also exhibits modern and contemporary artists whose work fits within the gallery’s aesthetic. Recent exhibitions have included: Emerson Woelffer: Works on Paper; Le Corbusier: Unité; and Shifting Tides: Photographs by Janice Mehlman.

Barbara Vaughn: Optasia will be on view from June 26 to July 20 with an opening reception on Saturday, July 4, 5-7PM. Vaughn’s work will also be on view at Quogue Gallery’s space at ArtHamptons from July 2 to July 5. Please visit quoguegallery.com or arthamptons.com for further information.