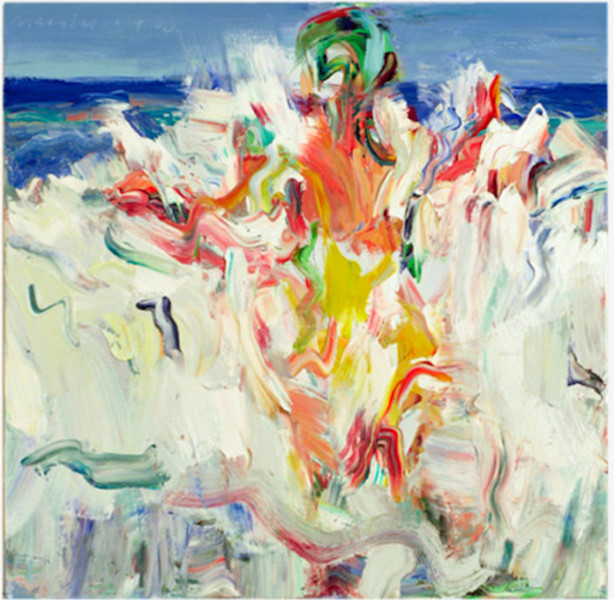 Quogue Gallery is pleased to present “Water’s Edge,” paintings by Marshall Crossman, a contemporary painter based in Pacifica, California, on the coast south of San Francisco. Primarily a studio painter working in oil on canvas, Crossman headed west in 1997 after growing up in the dead center of the country in Omaha, Nebraska, equally beyond reach of Pacific and the Atlantic. It is the Bay Area—both the physical surroundings and the artistic climate—that has informed her body of work.

Early in her career Crossman was influenced by Bay Area figurative painters; figures—be they shoppers or swimmers—have been the primary focus of her compositions. As the years have gone by, Crossman’s subjects, techniques, and the resulting works of art have evolved, and she confides that with her latest paintings, her Beach and Pacifica Series, “I have come into my own.” For Crossman, the progression has led to two essential elements in both concept and execution that have coalesced in paintings that shimmer with a distinct style and message.

For Crossman it is the movement, not the object, that matters. She states, “I have always enjoyed the figure, and until my very recent Pacifica Series, it has consistently been a part of my work, but for me, the figure never has superseded movement.” In her Beach Series, the movement of the figures is at one with the movement of the water. Just as at the chimerical water’s edge, where the line between sea and shore cannot be defined, the splashing waves and the bathers’ limbs in motion are indistinguishable.

Crossman’s work has always inhabited the ambiguous line between abstraction and representation, but with her recent work, and particularly in her Pacifica Series, she is teetering on the laser-sharp edge of the divide.

Pacifica grew out of her exploration of what would happen if she removed the figure. She explains, “As you remove graphic elements, the creation of the composition becomes far more difficult.” Rather than shying away from the challenge, she has embraced it and gone further by essentially removing the horizon line from many of her paintings, saying that it had “trapped me in the landscape tradition.” She is following in esteemed footsteps as her obfuscation of the seascape is reminiscent of J.M.W. Turner’s transition from the literal seascape to the atmospheric.

In her unrelenting mission to capture movement, Crossman is adamant in insisting that her paintings are neither landscapes nor seascapes. Although she now lives a mere 75 feet from the ocean, her works spring from her imagination, not from photographs or working outside her studio. Although some of her earlier work was inspired by photographs, she has eschewed the use of a stagnant image as a starting point. This enables her to more freely pursue her muse: movement.

To achieve the depiction of movement on canvas, Crossman paints wet into wet, enabling her to continually layer oil paint and take it away. The paint itself and the physical act of building and deconstructing are defining characteristics of her work that she accomplishes by using pieces of matte board to pull the paint across the canvas. Occasionally, she’ll use the more common palette knife but finds it too rigid to accomplish the blurring and abstraction she favors. While the striking tactility of her canvases is created by bold brushstrokes and deliberate digging and scraping into the paint, the overall process is intuitive. “The paintings evolve on their own,” Crossman says, “it is not a case of ‘a preliminary sketch’ followed by the painting execution.” Indeed, the Beach and Pacifica Series resonate with the profound quest for the elusive “total work of art.”

Marshall Crossman was born in Omaha, Nebraska, in 1951. She earned her BFA from Colorado State University in 1973. Crossman relocated to San Francisco in 1977 and soon became immersed in the Bay Area figurative tradition. She has been producing art in her San Francisco studio since 1981. Primarily a painter of oil on canvas, she experimented with watercolor in 2008 as an Artist-in-Residence at Foundation Obras in Portugal. Marshall Crossman is represented by several art galleries in the U.S. and her work can be found in private and public collections here and in Europe. Marshall Crossman lives in Pacifica, California, with her husband and son.

The Quogue Gallery was established in 2014 by Chester and Christy Murray, longtime art collectors and residents of Quogue. The gallery features contemporary emerging and established artists whose work includes paintings and prints, photography, glass, and sculpture. The gallery’s main focus is on displaying the work of East End artists who capture a mood, a color, or the extraordinary light that defines the East End. The artists do not necessarily represent the specific realities of the area, but rather have each been uniquely influenced or inspired by their surroundings. The gallery also exhibits modern and contemporary artists whose work fits within the gallery’s aesthetic. Recent exhibitions have included:  Emerson Woelffer: Works on Paper; Le Corbusier: Unité; Barbara Vaughn: Optasia, Laurel Sucsy and Ben Butler: Convergences and Photographs by Peter Moore, A Retrospective.