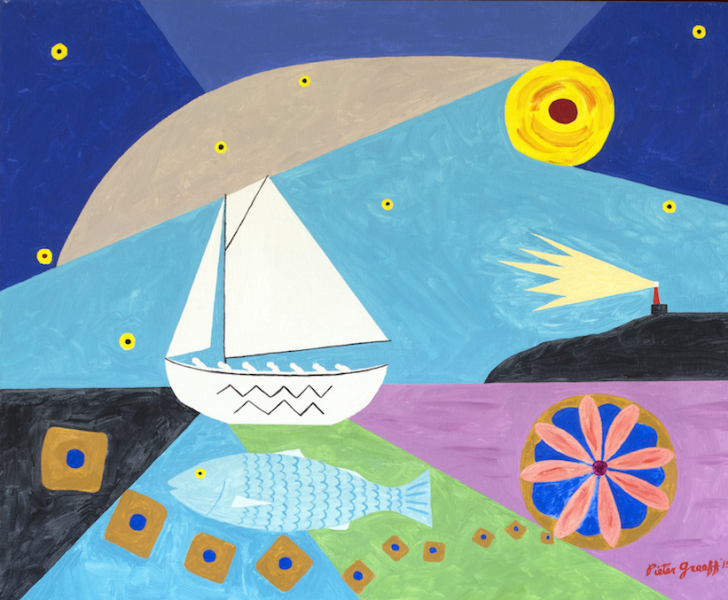 Quogue Gallery is pleased to announce the opening of “Faces of the Sea,” oil paintings by Pieter Greeff. The work of Pieter Greeff embodies the East End of Long Island—its light, marine scenes, and beach life. A lifelong Quogue resident who lives on the beach in a home that his father built in 1937, Greeff paints oils and watercolors that reflect his respect, awe and understanding of the sea, the beach and the nearby coastal bays. Much of his earlier work depicted the tyranny of nature and its effects on the sea, including subjects he is intimately familiar with: shipwrecks and storms. The house his father built miraculously survived the devastating hurricane of 1938.

More recently his works have taken on a more elemental tone as he has ventured into the kind of abstraction that Greeff believes can go beyond even human imagination. In such works as Outside, 2015, he explores the terrain between the realistic colors of the atmosphere and shapes of objects and the phantasmagoric. He accomplishes this by seeing objects for what they are and reducing them to their fundamental forms. Moving far from dark storms at sea, his flattened planes of bright, summery colors and simple shapes celebrate the delights of life near the shore, from the beaches to local fish markets.

As an artist who has spent his life bathed in the spectacular light of the East End of Long Island, Greeff infuses his seascapes and beach scenes with the ethereal effects of this particular light in paintings such as Beach Steps, 2008, and Shinnecock Sunset, 2011. In the former he captures the drama of light and shadow in shades of white and gray against the vivid blues of sea and sky. In the latter he captures the moment when the pinks and yellows of a gentle, mid-summer sunset cause the water to shimmer in tones of white dappled with pastel hues.

In their colorful depictions of quotidian scenes, Greeff’s recent works recall the early 1960s paintings of the American Pop artist Tom Wesselmann, while his earlier seascapes hark back to Winslow Homer, whom Greeff cites as a major influence. But no one had a greater impact on his life as an artist than his mother, Adele Greeff, a 20th century landscape painter and lecturer on art for the City of New York at the City Center Gallery. Her work is in the permanent collections of the National Museum of Women in the Arts in Washington, D.C., the Schenectady Museum and Guild Hall in East Hampton. Greeff spent many hours of his boyhood painting with his mother and meeting her many artist friends, including the legendary Jackson Pollock, whose studio he visited with her. When Pollock barked to him, “Hey kid, follow me,” Greeff did as he was told and witnessed Pollock using an eggbeater to mix paint in a can.

Although it wasn’t until later in life that Greeff devoted himself full-time to art, he did have the good fortune to do some coursework while at Harvard with the renowned art professor Ben Roland. Pieter Greeff’s work has been shown in New York City at the Wall Street Art Association, as well as in Philadelphia, Quogue, Westhampton Beach, East Hampton, and in Middletown and Strasburg in Virginia. His work is in private and corporate collections in the U.S., Europe and Latin America.

The Quogue Gallery was established in 2014 by Chester and Christy Murray, longtime art collectors and residents of Quogue. The gallery features contemporary emerging and established artists whose work includes paintings and prints, photography, glass, and sculpture. The gallery’s main focus is on displaying the work of East End artists who capture a mood, a color, or the extraordinary light that defines the East End. The artists do not necessarily represent the specific realities of the area, but rather have each been uniquely influenced or inspired by their surroundings. The gallery also exhibits modern and contemporary artists whose work fits within the gallery’s aesthetic.   Recent exhibitions have included: Emerson Woelffer: Works on Paper; Le Corbusier: Unité; Janice Mehlman: Shifting Tides; Barbara Vaughn: Optasia, Laurel Sucsy + Ben Butler: Convergences; and Photographs by Peter Moore: A Retrospective.