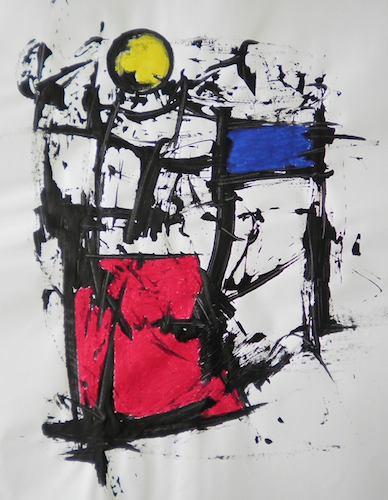 Von Allen: Paint What Thy Wilt

Von Allen’s bold paintings and delicate drawings arrive at the intersection of three significant influences: Abstract Expressionism, contemporary Native American art, and the bond between music (notably jazz) and painting. As such, his impressive body of work holds a unique place in the story of contemporary art, rendering the artist long overdue for greater recognition.

Born in 1961 in Jacksonville, North Carolina, Von Allen went to California to study painting at the Village Center for the Arts in Palm Springs. He moved to New York directly after school, befriending Ruth Kligman, an artist who was an insider when the Abstract Expressionist movement was at its peak. One of the most interesting aspects of his development is his commitment to abstraction, which aligns his work even to this day with the Abstract Expressionists more than any other particular style or method.

While many Native American artists—such as Merritt Johnson, Fritz Scholder, Allan Houser and George Morrison—turned to figuration, the landscape and Pop, Von Allen took a different path that stayed closer not only to the work of the New York School, but Modernist masters such as Kandinsky, Klee, Miro and the aesthetic of the Bauhaus. . He lives and works today in the hills of Palm Springs, California, where his blissful studio routine combines painting and listening to jazz and classical music.

One of the keenest appreciations of Von Allen’s painting was written in 2004 by Ruth Kligman, whose expert perspective on his work is loaned further credibility because it comes not only from a fellow artist but one who had moved in the circles of many of the leading lights of the era, including Jackson Pollock and Willem de Kooning. “Von Allen began his four-decade career as an abstract expressionist artist in the 1970s,” she wrote, noting that he “established a deeply personal style in abstract form and symbolic themes, creating unusual textures in his works with dynamic fields of color and turbulent styles.”

“Over the course of his remarkable career,” Kligman concluded, “Von Allen has made an exceptional contribution to the body of abstract expressionist work worldwide, and ranks as one of our most important new masters of the genre.”

Like Kandinsky, Von Allen benefits from a natural sense of the link between aural and visual, a synaesthetic capability that gives his paintings and drawings the rhythmic, harmonic and even melodic presence of great music.

As Kligman observed in her seminal essay, “Allen coined the phrase ‘Symphonic Improvisation’ to describe his process of transforming lines and strokes into collections of figures that dissolve into movement. Working in several media, including oil and pastel on paper, board, and canvas, his paintings strive toward direct expression by focusing on the act of painting itself. These works of ‘Symphonic Improvisation’ stand on the border between un-deliberate composition and free gesture.”

Nowhere is this more evident than in the works that celebrate jazz. In a jaunty, colorful idiom of shapes that evoke not just the great Stuart Davis but other American art stars including Elizabeth Murray, Von Allen has a deft way of sounding the colors that turns looking into listening.

Only an artist with a great ear and superb grasp of music at the level of performance would be able to differentiate so subtly among different tones as Von Allen does in the important “Vibrations” series of black ink drawings made in 2001. It comes as no surprise to learn that he is an accomplished pianist whose repertoire extends from J. S. Bach and Johann Pachelbel to Oscar Peterson and Nat King Cole.

Von Allen’s work has reached a select group of collectors through solo exhibitions starting in the 1980s at the La Jolla Fine Art Gallery, the Thomas Gallery in Palm Springs and informal settings in Colorado. He has been reviewed in Artnews, Art & Antiques and Art in America.

As Quogue’s first and only private art gallery, the Quogue Gallery is a dynamic new space in the Hamptons where artists, collectors, and art enthusiasts can meet and share their common passion for serious artistic investigation and appreciation. The gallery’s mission is to present a program of artistic excellence not limited to any genre or medium. Its focus is on modern and contemporary art created by emerging, established and historically important artists. An essential aspect of the mission is to establish the gallery as an active, vibrant, and inventive participant in the Hamptons art panorama, with artist talks and events that significantly contribute to the modern and contemporary art discourse.