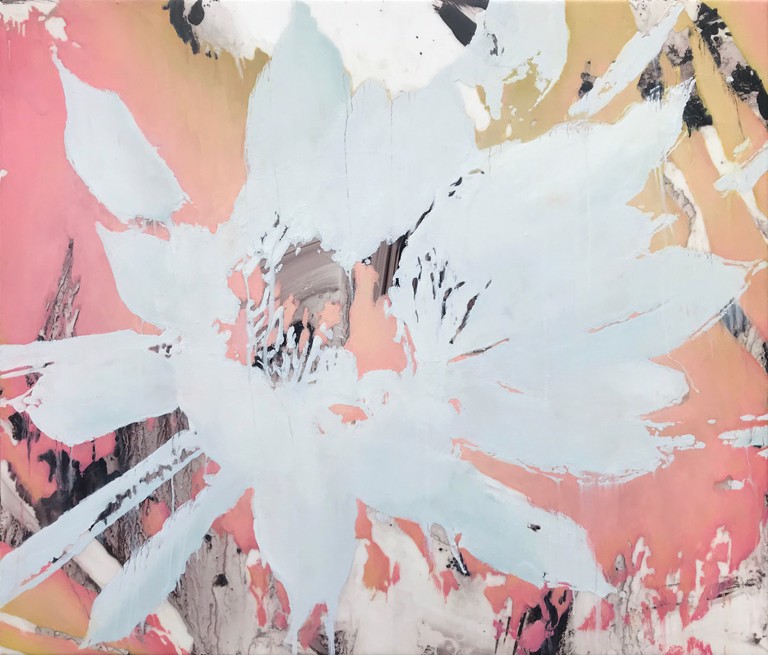 Jeff Muhs paints subliminal seductions. In the series, Deliverance, he orchestrates a balance of rhythms, colors, and compositions that induce us to embark on that voyage when flowers make their irrepressible emergence in spring and bloom into summer gardens. But this garden path is not radiating riotous color. Nor do these flowers foist upon us the saccharine colors and static compositions arranged in the stereotypical tabletop still life. Instead, Muhs leads us on a different path. On this expressively gestural journey he tips his hat to Abstract Expressionism but avoids the typically flat picture planes, free-wheeling compositions, and often bold colors of those generations who have continued to pay homage to the New York School of the 1950s. Instead, he developed his own technique for weaving a sense of depth by adding (as well as peeling away) multiple layers of color, shape, and texture. Each canvas begins with a layer of white, which is then sealed with resin. This smooth surface allows him to launch into painting his next layer with a fluidly expressive gestural technique, which he describes “as if painting on glass.” With a variety of brushes, mops, rags, and special tools of his own creation he generates a lyrical flow. The canvas spends time on the easel as well as the floor as this underlayer of monochromatic blacks are spread, splashed, scraped, and texturized with thinner.

Then, sensing the random rhythms between the finished patterns of the monochromatic background, Muhs begins a third layer with soft pastel colors finely tuned in gradations that lure the eye. Here he becomes the conductor of a musical performance, one who sets the allegro tempo. The last layer is the image of the flower itself, subtly delivered because all of the petals are white, sometimes even emulating the solarization effect found in photography — but his are purely painted by hand. The subtle whiteness of the petals allows them to become compositional elements that draw us in, inviting us to follow the rhythm into the movement that is spring. Deliverance — the large canvas, from which this exhibition gets its title — effectively reveals this process, as do Liberty, Promise of Fruit, and Persuasion Standard. Ultimately, these overlaid flowers are a pretext for the seduction because we soon find ourselves in a sensuous dreamland. Most contemporary “flower paintings” — including those well-known screenprints by Andy Warhol (in 1964 and again in 1982) — do not beckon us to wander into this type of dreamland. The same is true for the paintings by Donald Sultan, who since the mid 1980s has composed colored flowers starkly contrasting against a black tar ground. 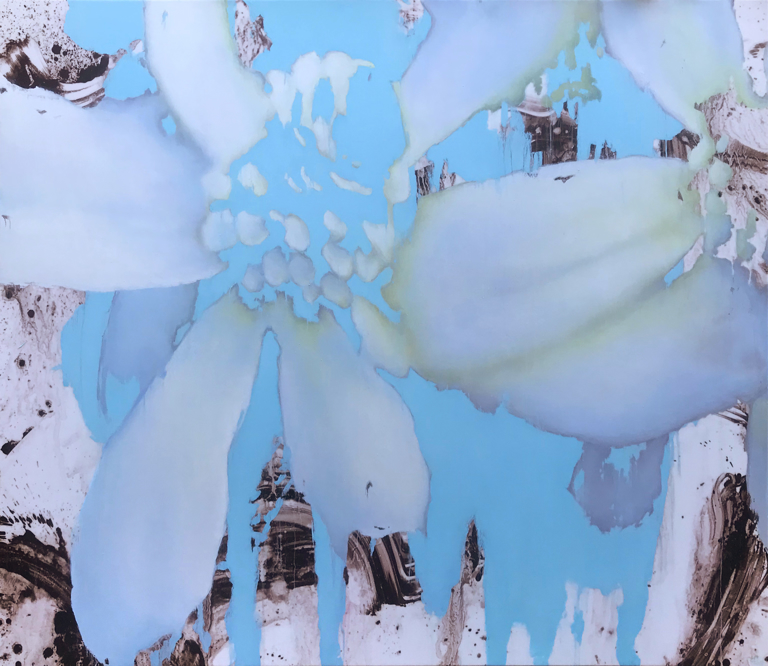 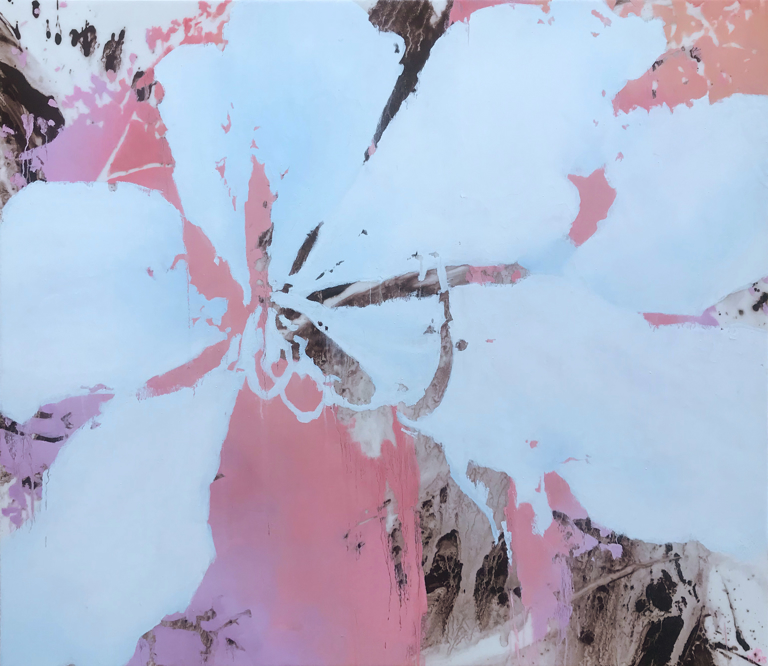 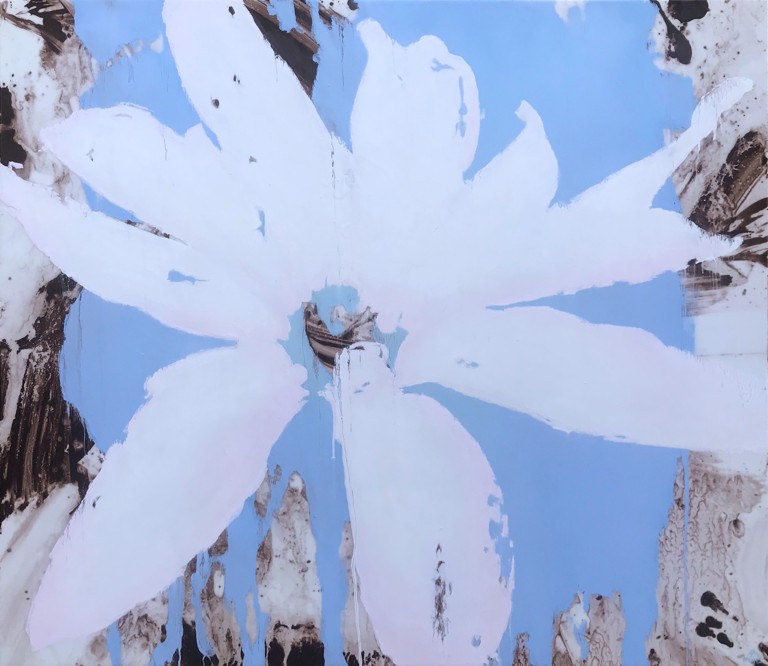 Muhs refers to his complex and innovative layering as “the engine that’s driving the painting.” In the Deliverance series this layering simulates the emergence of the plant as it pushes through the soil to a state of freedom. Here is the reality of creation and the symbol of rebirth — deliverance.  If one’s exposure to Muh’s body of work knew only of this growing series of paintings they could never imagine his back story. His father was a hunting and fishing guide and expert carver of decoys in Southampton. Son followed father’s footsteps and became an expert decoy carver, too. At 18, he received his first immersive exposure to art history at the School of Visual Arts in New York. His love for art from the Renaissance through French Neo-Classicism (Ingres stood out as a favorite) was reflected in his realist approach to painting. Even after graduating he continued carving and entered the prestigious Ward World Championship for carving wildfowl. He was voted world champion carver twice in the “Interpretive” category. Most pertinent to the present paintings, note that this category required that “A carving should emphasize form, content, and movement rather than a realistic duplication of the wildfowl. It should be presented in a style that provokes thought and wonder.” As Muhs entered the 21st century his stylistic approach to both painting and sculpture evolved from its realist roots to a new form of abstraction. He has clearly arrived at a mature style that continues to “provoke thought and wonder.” His intimacy with art history as a force driving his inspiration continues to play an important role in his work, fostering a unique expressionist technique, love of color, and imagery that invite us down a rare garden path.