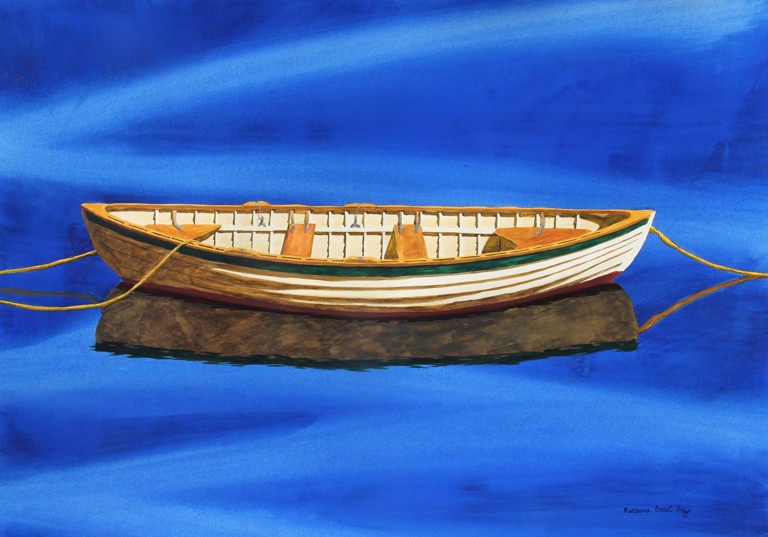 Quogue Gallery is pleased and honored to present Barbara Ernst Prey: Vanishing Point. The exhibition is a comprehensive look at the work of an artist who Charles A. Riley, Director of the Nassau County Museum of Art,  in his exhibition catalogue essay describes as…”quite simply put, the world’s pre-eminent woman watercolorist.” The exhibition features twenty works in various mediums — watercolor on paper, oil on panel and canvas and digital print — which reflect the artist’s Long Island roots. There are three paintings of Quogue scenes in the exhibition.

In the catalogue essay, Riley, who has been writing about Prey for decades, places her work in the historical art canon. Riley writes, “Starting within the realist category, the clear descent from Mary Cassatt, Rosa Bonheur…Georgia O’Keeffe and others seems limiting… Open the frame to include abstraction and a different matrilineal prospect follows – Mitchell, Lee Krasner, Elaine de Kooning, Jane Wilson, Mary Abbott and perhaps closest in terms of sheer aesthetics, Helen Frankenthaler. The Ninth Street Women are enjoying a moment (my own museum played its role), offering Prey a group context one generation removed who accomplished by virtue of their own pluck and talent the forging of a style both painterly and powerful that locks down its claim to posterity. The only two women painters appointed to the National Council on the Arts are Prey and Frankenthaler. Both of them embody a cardinal principle of aesthetics: Originality married to technique earns this ranking.”

One of America’s most renowned contemporary artists, Barbara  Ernst Prey was recently commissioned by MASS MoCA to create the largest known watercolor painting  (8 by 15 feet) for their new building. Prey’s work also resides in the National Gallery of Art, the Brooklyn Museum, the Smithsonian American Art Museum, the New York Historical Society, Kennedy Space Center and the permanent collection of the White House, where she is one of just two living female artists represented.

Prey has served for the past ten years as the sole visual artist on the U.S. President-appointed National Council on the Arts, the advisory board to the National Endowment for the Arts. Artists are appointed for their contributions and recognition in American Art. In 2003, the President and First Lady commissioned her to paint the Diplomatic Reception Room for the official White House Christmas card. With dozens of artworks commissioned by government agencies and institutions Prey is a global ambassador for American Art. Commissioned four times by NASA, her painting of the x-43 was included in the Smithsonian’s traveling exhibit NASA/ART:50 Years of Exploration. Her other NASA commissions are: The Columbia Tribute, the International Space Station, and the Shuttle Discovery: Return to Flight on exhibit at the Kennedy Space Center. She was recently featured on the CBS Evening News for her NASA artwork. Tapped annually for the U.S. Art in Embassies program, Prey’s work has been on display in over one hundred U.S. embassies and consulates worldwide, including those in Paris, Hong Kong, and Madrid. Her painting Gallantly Streaming is currently selected for exhibit in the lobby of the U.S. Mission to the U.N.

Prey earned a Bachelor’s degree from Williams College, where she is an adjunct faculty member, and a Master’s degree from Harvard University. She has received numerous institutional accolades, including a grant from the Henry Luce Foundation, where she spent a year painting in Asia, a Fulbright Scholarship and the New York State Senate’s “Women of Distinction” Award. She maintains studios in New York, Maine, and Massachusetts.