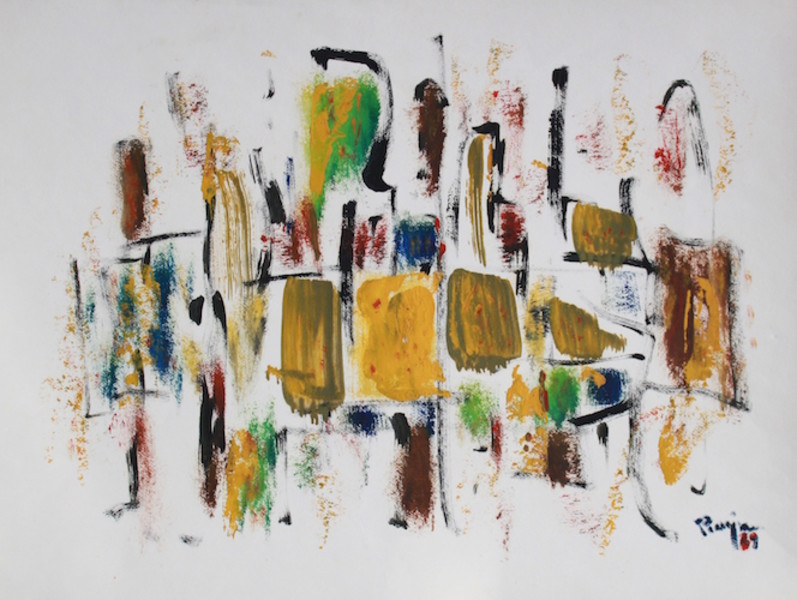 Pinajian Discovery Unveiled in Special Exhibition at the Quogue Gallery

Quogue, NY. The Estate Collection of Arthur Pinajian and the Quogue Gallery have announced a special exhibition drawn from the extraordinary discovery of artwork created by the late Arthur Pinajian (1914-1999). The exhibition will run from Friday, November 20, through Thursday, December 31, at the Quogue Gallery, at 44 Quogue Street, Quogue, NY 11969, with an opening reception scheduled on Saturday, November 28, from 4 to 7 p.m.

The limited-run exhibition of 14 works on paper will feature the artist’s lyrical landscapes and mid-century abstractions.

When it came to his work, Arthur Pinajian was a hoarder. After his death in 1999, artwork created over a span of five decades was found stacked up in the one-car garage and attic of the Long Island cottage he shared with his sister in Bellport. In the years before his death, Pinajian had implored his sister simply to “throw it all away.” Fortunately, at the last moment, this massive body of work was rescued by a cousin.

In 2007, the late Dr. William Innes Homer, once dean of American art historians, reluctantly agreed to study the collection and was stunned by what he found: a staggering array of extraordinary abstract landscape and figurative paintings by a gifted artist who was completely unknown in his lifetime.

Homer concluded that Arthur Pinajian represented one of the most compelling discoveries in the history of 20th century American art: “Even though Pinajian was a creative force to be reckoned with, during his lifetime he rarely exhibited or sold his paintings. Instead, he pursued his goals in isolation with the single-minded focus of a Gauguin or Cézanne, refusing to give up in the face of public indifference.”

“In his later years,” Homer continued, “he could be compared to a lone researcher in a laboratory pursuing knowledge for its own sake. His exhaustive diaries and art notes make it clear that he dedicated all of his days to his art. He was passionate and unequivocally committed … Ultimately, Pinajian’s work reflects the soul of a flawed, yet brilliant, artistic genius. When he hits the mark, especially in his abstractions, he can be ranked among the best artists of his era.”

As a boy growing up in an Armenian community in West Hoboken, New Jersey, Pinajian was a completely self-trained cartoonist. During the Great Depression he became one of the pioneers in a new medium: the comic book. In 1940 he created “Madam Fatal,” the first cross-dressing superhero, for Crack Comics. After World War II, he enrolled at the Art Students League in Woodstock, N.Y.

Although he associated with a number of the New York Abstract Expressionists, such as Franz Kline and Philip Guston, he was largely reclusive. For 22 years his life revolved around Woodstock while he passionately pursued his painting. His admirably poetic color combinations are linked to the tonalities of his better-known fellow Armenian, Arshile Gorky [ca.1904-1948]. Late in life he moved with his sister to Bellport. In a tiny bedroom studio there he strived for visual and spiritual conclusions regarding flatness and color, goals paralleling those of many Abstract Expressionists.

Arthur Pinajian bears an uncanny resemblance to the hero in Kurt Vonnegut’s Bluebeard: The Autobiography of Rabo Karabekian, a 1987 novel about an eccentric painter. Both Pinajian and Karabekian, aka Bluebeard, were Armenian-Americans, raised by parents who survived the 1915 Armenian genocide of approximately one and a half million men, women and children, and made their way to the United States, where they raised families during the Great Depression.

Both men served with the United States Army during World War II in the European theater, each earning the Bronze Star for valor. After the war, both abandoned their careers as illustrators for higher artistic pursuits, joined the Art Students League in New York, and hung out with the Abstract Expressionists at the Cedar Tavern in Greenwich Village. Both eventually moved to Long Island’s East End near the ocean, where they kept their paintings tightly locked away in a garage.

Breaking Vonnegut’s character mold, the discovery of his artwork has thrust Pinajian into the public eye, inciting a publicity storm with his arrival. His extraordinary artistic gifts have attracted the attention of art lovers and news outlets all over the world, and his story has been reported by sources including the New York Times, wsj.com, London Daily Mail, ABC’s “20/20” and “Good Morning America, “ which in 2013 heralded Pinajian as “the unlikely discovery that has rocked the art world.”

Finally, the artist has found his audience.

The upcoming exhibition at the Quogue Gallery comes on the heels of news that Pinajian’s artwork has been chosen by the United States Department of State for an exhibition of American artists of Armenian heritage in the American Ambassador’s Residence in Yerevan, Armenia.

The Quogue Gallery was established in 2014 by Chester and Christy Murray, longtime art collectors and residents of Quogue. The gallery features contemporary emerging and established artists whose work includes paintings and prints, photography, glass, and sculpture. The gallery’s main focus is on displaying the work of East End artists who capture the moods, the colors, or the extraordinary light that define the East End. The artists do not necessarily represent the specific realities of the area, but rather have each been uniquely influenced or inspired by their surroundings. The gallery also exhibits modern and contemporary artists whose work fits within the gallery’s aesthetic. Recent exhibitions have included:  Emerson Woelffer: Works on Paper; Shifting Tides: Photographs by Janice Mehlman; Barbara Vaughn: Optasia; and Marshall Crossman: Water’s Edge.