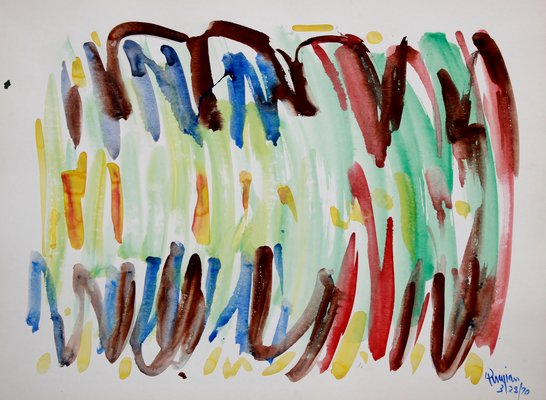 It was a business proposal that led Thomas Schultz to a modest vacant cottage in the heart of Bellport Village almost 10 years ago. It was his curiosity that drew him to the dilapidated one-car garage behind it. He yanked up the door, but it was jammed, so he shimmied underneath. He blinked hard, adjusting to the low light, focusing on 4-foot-high towers of papers stretching toward the mildew- and mold-infested ceiling. Others had tipped over on their sides, covered in cobwebs. Scrolls of rolled-up canvases hid in the corners, bound by string, with roots from invasive vegetation growing around and, literally, through them.

Overcoming his initial shock, Mr. Schultz took a step closer, peering down at the floor. Gazing up at him were dark, bold geometric designs and light, bright, lyrical landscapes, from complex oils to simplistic drawings, some slowly turning to dust.

“I realized I was looking at someone’s legacy, and I was amazed. I was more interested in the art, at this point, than I was the house,” Mr. Schultz said, who was scoping out the property for his business partner, Lawrence Joseph. “I just basically made an offer to buy the artwork, as well. I didn’t know what in the world we would do with it, or if there was any value. I just knew we weren’t going to throw someone’s life work in the Dumpster.”

The two friends and colleagues stored the art in Patchogue and, with the help of various experts and historians, have worked to catalog and appraise the collection by little-known Armenian-American artist Arthur Pinajian. And starting Friday, nearly two dozen never-before-seen works on paper and select oils from the 1950s to the 1990s will be on view at The Quogue Gallery.

“We’re a gallery that specializes in contemporary art, and this work is masterfully done, and beautiful to look at,” explained Chester Murray, director of The Quogue Gallery. “He was an artist working almost for art’s sake.”

Born in 1914, Mr. Pinajian was the son of Armenian holocaust survivors and grew up in Union City, New Jersey. He broke into the art world as a cartoonist in the 1930s and found considerable success working for comic book publishers the likes of Marvel, Quality and Centaur.

He fought in World War II and saw the Battle of the Bulge, earning the Bronze Star for valor, and attended the Art Students League in New York when he returned, committing himself to the pursuit of serious painting and immersing himself with the abstract expressionist culture in Greenwich Village before relocating to Woodstock.

“I understand he was very social and outgoing in those Woodstock years. He was very much a fun guy to be with, the life of the party,” Mr. Schultz said. “In his final decades in Bellport, it appears he was more of a hermit, someone who did not socialize with his neighbors.”

He relied on his sister, Armen, to pay the bills and support his life passion. He painted every day, hoarding his artwork in the garage and attic, and implored her to simply throw it out in the years before his death in 1999.

Fortunately for the art world, a cousin rescued the 7,000 pieces and, when Ms. Pinajian died in 2005, the 625-square-foot cottage hit the market—the artist’s paint-splattered bedroom floor still intact.

When the economy crashed just after Mr. Joseph purchased the house, both his and Mr. Schultz’s attention turned toward the artwork. As a favor to a friend, art historian William Innes Homer reluctantly agreed to study the collection of abstract landscape and figurative paintings. He has since called it one of the most compelling discoveries in the history of 20th-century American art—one appraised at $30 million, according to reports.

“Even though Pinajian was a creative force to be reckoned with, during his lifetime he rarely exhibited or sold his paintings. Instead, he pursued his goals in isolation with the single-minded focus of a Gauguin or Cézanne, refusing to give up in the face of public indifference,” Mr. Homer concluded. “In his later years, he could be compared to a lone researcher in a laboratory … Ultimately, Pinajian’s work reflects the soul of a flawed, yet brilliant, artistic genius. When he hits the mark, especially in his abstractions, he can be ranked among the best artists of his era.”

It wasn’t long before The New York Times caught wind of the find, and a feature article on the collection attracted potential buyers from across the globe, Mr. Schultz said. It also interested art historian Peter Hastings Falk, who has helped catalog and organize the collection in the years since.

Managing and overseeing the conservation process has become a full-time job, according to Mr. Schultz, who is now the executive director of the estate. Since 2010, approximately 150 pieces have sold, some fetching upward of $125,000. In Quogue, the works on paper will range from $1,800 to $12,000, with the oils hovering around $38,000, according to Mr. Murray.

But the goal is to keep the majority of the collection whole, with each sale supporting the conservation process. There are still 150 works on the market, and one “major” acquisition in 2012 will soon be donated to a Los Angeles institution, marking the first public display in a museum of this scale—though Mr. Schultz could not be more specific.

“I look forward to that day when I take my three girls and we go out to visit that museum and stand in front of that Pinajian, and I explain to them that I had something to do with that,” Mr. Schultz said. “I look forward to that moment that canvas rests very comfortably in the abstract expressionists room, that it found a place where it belongs.”

In the meantime, the Schultz clan is still settling into their new home not far from the Pinajian cottage—which they bought from Mr. Joseph, renovated and lived in from 2007 to just last year. “I’m inspired by Pinajian every day. I’m looking at his work as we speak. He spent his lifetime laboring and creating this great work,” Mr. Schultz said. “I’m honored to be a part of this legacy. I know he’s smiling down on us.”

Oddly enough, on that fateful day in 2006, when Mr. Schultz made the big discovery, he also noticed a familiar throw rug. When he unrolled it, a chill shot down his spine when he saw even more familiar ember stains.

“I sold him that rug at a yard sale in 1995. It had been in front of my fireplace, where it got those burns,” he said. “I was asking $25 for it, and I ended up selling it for five bucks. I remember this older gentleman and an older woman, probably in their 70s, putting it under their arms and walking down the street. I offered to deliver it, but they said, ‘No, we’ve got it.’ I couldn’t believe I had met them, unknowingly.”

He laughed to himself. “It’s like it was almost meant to be.”

The Quogue Gallery will exhibit work by Arthur Pinajian from Friday, November 20, though December 31. An opening reception will be held on Saturday, November 28, from 4 to 7 p.m. For more information, call (631) 653-6236, or visit quoguegallery.com.

Read the article on 27East.