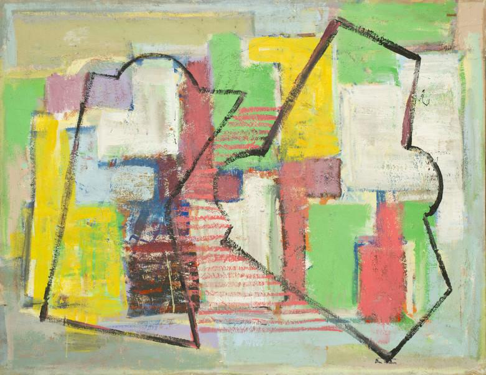 Quogue, N.Y., June 26, 2017. “Ben Wilson: An Abstract Expressionist Vision” will be the next exhibition opening at the Quogue Gallery, featuring 14 paintings, oil on canvas or Masonite, dating from as early as 1963 and running to 1990. The exhibition will be on view from June 29 to July 19, 2017, with an opening reception scheduled on Saturday, July 1, from 5 to 7 p.m.

In the 1950s, the Abstract Expressionism movement—called a “shower of wonders” by contemporary critic Harold Rosenberg—made New York the center of the art world. Inside the close-knit circle of American painters and sculptors who became the heroes in this exciting chapter of art history, Ben Wilson forged his own distinctive style from a rigorous drawing regimen, painterly techniques refined in studio classes in Manhattan and Paris, and that well-known Roosevelt-era incubator of talent, the Works Progress Administration (WPA).

It was an epoch of momentous change. Like Cubism and Impressionism, “action painting” (as Rosenberg called it in 1952) advanced the course of Modernism along the path toward abstraction. Wilson’s development as a painter mirrored that progression, moving away from poignant ’30s-era figural paintings rooted in German and Austrian expressionism toward the geometries of his vibrant Ab Ex paintings.

Just as with Cubism and Impressionism, the excitement that continues to awe viewers of works by Wilson, de Kooning, Pollock, Kline, Rothko and Gorky starts with the sheer energy involved in the way these artists put paint on canvas. This kind of energy roars off the canvas in the fast tempo and high-toned vibratory color contrasts of Regatta, Wilson’s wind-blown rhapsody that tacks deftly between blues and golds, curves and corners, racing several knots above comfortable cruising speed.

The brisk rhythms of the parallel foreground forms propel the eye across diamonds of brilliant blue. Pursue that opening of blue sky into the complex angles and recessionary interstices of Mozart & Miles and it is clear that Wilson had not just mastered his lessons in Cubism (while a student at the Academie Julien in Paris his teachers were among the eyewitnesses to that era), but had found his own way into the architectural idiom that was a major part of Abstract Expressionism. Because the truths the painters of this movement were putting on canvas were inner as much as outer, emotions as well as observations, each offers his or her own style, and Mozart & Miles is as individual as it is original. 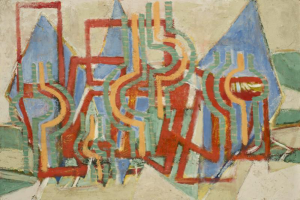 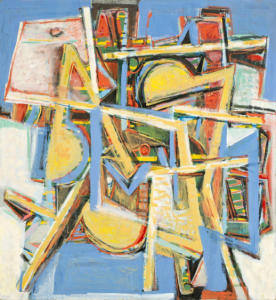 An invaluable set of annotations to the paintings in this exhibition was created by sculptor Joanne Wilson Jaffe, Ben Wilson’s daughter. She assiduously tracks the steps from figuration to abstraction in what she calls an “arduous” transition that began in the 1950s and continued to the early 1960s. She flags the trace elements of the figure in Gibraltar, a liminal work for Wilson as he moved from the rounded, Neo-Classical figures of his deeply moving paintings in the ’30s and ’40s—haunting images of the ravages of the Spanish Civil War and World War II, in many cases including paintings of refuges that are strikingly resonant today—into the abstract idiom of the day.

From the same moment in his career, the absorbing work Outrageous Fortune, with its own rounded echoes of the figures from his earlier work, offers a hint at the spontaneity, and frequent playfulness, of Wilson’s process. Note in particular the drips running their opposing courses after he turned the canvas on its side. 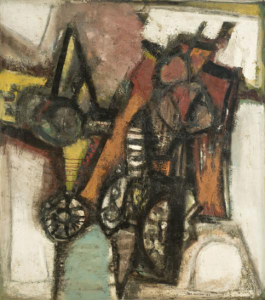 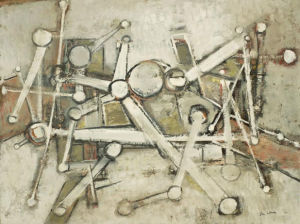 Wilson was born in Philadelphia, the son of Ukrainian immigrants who settled in New York. Like Rothko, Newman and Gorky, the profound currents of historic awareness that he brought to his work, even at its most abstract, can be traced to the experience of his family. He studied art at the National Academy of Design and at City College, graduating in 1935, and joined the star-studded roster of the WPA artists, which helped him keep a studio going in Chelsea during the decade-long Depression.

A supremely talented and diligent draughtsman, he became one of the youngest artists to be included in the stable of the prestigious ACA Gallery in 1936, and also showed with the Bombshell Group at the Riverside Museum in 1942. Critics singled out his work in their reviews of group shows, and the Neuf Gallery gave him his first solo show in 1946. From that moment, he was on his way to a solid career as an artist and teacher that kept him in the studio daily until his death in 2001. His sketchbooks and papers, together with the papers of his wife Evelyn, a sculptor, are included in the Smithsonian’s Archives of American Art. 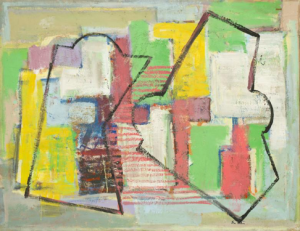 As Quogue’s first and only private art gallery, the Quogue Gallery is a dynamic space in the Hamptons where artists, collectors, and art enthusiasts can meet and share their common passion for serious artistic investigation and appreciation. The gallery’s mission is to present a program of artistic excellence not limited to any genre or medium. Its focus is on modern and contemporary art created by emerging, established, and historically important artists. An essential aspect of the mission is to establish the gallery as an active, vibrant, and inventive participant in the Hamptons art panorama, with artist talks and events that significantly contribute to the modern and contemporary art discourse.