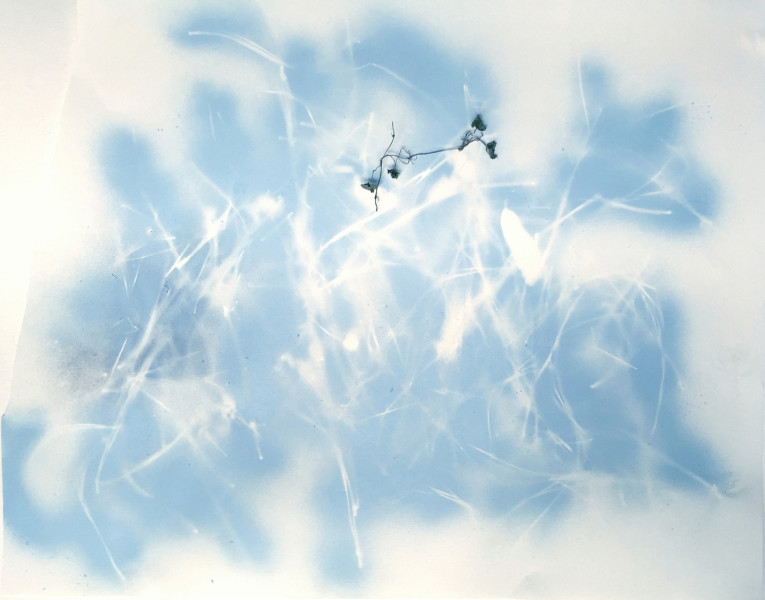 Quogue Gallery is pleased to announce the opening of “Laurel Sucsy + Ben Butler: Convergences,” featuring photographs by Sucsy and sculptures by Butler. The two are a married couple who are based in Memphis, Tennessee and Quogue, New York. Sucsy works primarily as a painter and more recently as a photographer, and Butler works almost exclusively as a sculptor of wood. While their techniques and media share little in common, they are both keenly interested in the relationships of shapes, the rhythm of forms, and where edges converge and disappear. They are firmly committed to abstraction and prioritize the experience of discovery throughout the creative process.

Sucsy’s photographs have their roots in the preliminary work she has done for her paintings over the last decade. In her painting process, she routinely uses scraps of paper to test relationships of proportion and scale. In the photographic work, those papers are repurposed and, along with light and shadow, become the subject.

For the Macula series of photographs, she dipped torn paper in plaster and then assembled the shapes into sculptural arrangements that she then photographed in natural light. Sucsy, as can be seen in Macula 4, masterfully captures not only where edges meet and the relationships between the planes of the plaster-encrusted paper, but also draws our attention to high and low contrasts of light and shadow, recalling the way Agnes Martin uses light to evoke our experience of the natural world. Joining a long lineage of artists concerned with the conditions of perception, Sucsy focuses on moments of flux. She describes: “I am interested in thwarting how photography compresses time, and instead creating an experience that opens up and regenerates.” 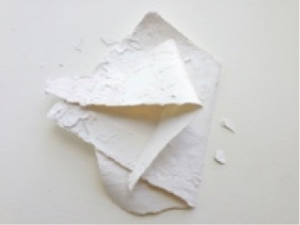 In her Muldoon series, Sucsy has pushed further the idea of “capturing a moment to have many moments” as she explains, by relying on intuition to an even greater degree, often resulting in painterly photographs such as Muldoon 1. Here, as with her Macula works, Sucsy relies solely on natural light and arrangement but does not manipulate the photographs. The effect of softly reverberating color is manifest because she thinks like a painter – regardless of whether there is a brush, a piece of paper, bits of plaster or a camera in her hand.

Like Sucsy, Butler states that “I never begin with an image or predetermined form.” Instead he works directly with a material and a set of narrow parameters for manipulating that material. It is through a process of experimentation and discovery that he hopes to surprise both himself and the viewer. The work almost always involves the accumulation of similar parts and a resulting sense of growth. It is a mode of working shared by a number of contemporary sculptors, including Tara Donovan, whose accretions of everyday objects become massive, phenomenological forms. While a similar process is at the core of Butler’s work, he is also particularly interested in exploring the distinction between human and non-human objects. His highly evocative sculptures reference nature not by reproducing its forms, but by mimicking its processes.

Butler’s choice of wood as his medium is fitting, as his sticks, boards, and wedges are at once organic and man-made. In Scholars’ Rock, and other works, he employs cedar shingles – a building material with a rich history in Long Island architecture. Originally experimenting with remnant shingle fragments, Butler found a perfect unit – a uniform shape manufactured with a slight wedge that could be easily worked and endlessly varied. He discovered rich potential in its ability to generate curves and unexpected forms. In addition, cedar’s natural color variation highlights the repetitive segmentation of the sculptures. The viewer is drawn in to the patterned surfaces and engaged in the process of uncovering of how the simple parts become a complex whole.

Laurel Sucsy received an MFA in painting from Tyler School of Art, PA and a BA from Bowdoin College, ME. Sucsy has also undergone studies at Temple University Rome and Brandeis University, MA and completed residencies at The Ragdale Foundation, The Virginia Center for the Creative Arts, and The Vermont Studio Center. Selected solo exhibitions include Just Hot Milk, The Medicine Factory, Memphis, TN (2014), Chasing the Rabbit, Clough-Hanson Gallery, Memphis, TN (2012), and Paintings, John Davis Gallery, Hudson, NY (2008). Sucsy’s paintings and photographs have been included in numerous group shows, including, Identity at Mississippi State University, MS; Present Tense at The Dixon Gallery and Gardens, Memphis, TN; Boundary Hunters at Fosdick- Nelson Gallery, Alfred, NY; Gangbusters at Plane Space Gallery, NYC among others. She recently curated and participated in Between the Eyes at Crosstown Arts Gallery in Memphis, TN. Sucsy lives and works in Memphis, TN and Quogue, NY.

Ben Butler received an MFA in sculpture from the School of Art Institute of Chicago and a BA in visual arts with high honors from Bowdoin College. Butler has also undergone studies at the School of Visual Arts, New York and has completed residencies at Acre (2014), The Bemis Center for Contemporary Art (2008), The MacDowell Colony (2004), and The Ucross Foundation (2000), among others. In 2006 he was awarded the Pollack-Krasner Individual Artist Grant. He has had solo exhibitions at Suyama Space, Seattle, Washington, Rice University, Houston, Texas, John Davis Gallery, Hudson, NY, among others. An upcoming exhibition of his sculptures and drawings at The University of Mississippi Museum will open in September 2015. Butler lives and works in Memphis, TN and Quogue, NY.

The Quogue Gallery was established in 2014 by Chester and Christy Murray, long time art collectors and residents of Quogue. The gallery features contemporary emerging and established artists whose work includes paintings and prints, photography, glass, and sculpture. The gallery’s main focus is on displaying the work of East End artists who capture a mood, a color, or the extraordinary light that define the East End. The artists do not necessarily represent the specific realities of the area, but rather have each uniquely been influenced or inspired by their surroundings. The gallery also exhibits modern and contemporary artists whose work fits within the gallery’s aesthetic.   Recent exhibitions have included: Emerson Woelffer: Works on Paper; Le Corbusier: Unité; Shifting Tides: Photographs by Janice Mehlman; and Barbara Vaughn: Optasia.